We are writing about our trip to Thailand fairly late (since we went at the end of December), but just thinking about everything that happened was overwhelming so sitting down to write about it was daunting.  So here goes…I will try to be as brief as possible.

The day after Christmas we were scheduled to fly out of Taoyuan to Bangkok, spend a night in Bangkok, and then fly to Phuket where we would join our friends Danvin and Frankie.  The night before, we had Christmas dinner with our family at an all-you-can-eat sushi restaurant where Mike had his fair share of raw fish.  So the morning we were supposed to leave, Mike tells me that he is feeling sick…really sick.  I confirmed that he had a 102 temperature, gave him Advil, and had him sleep.  We planned on catching a train around 2pm to arrive in Taoyuan with plenty of time to make our evening flight.  When 1pm arrived he was not feeling any better.  After looking at all our options (which weren’t many since most future flights to Thailand were booked), Mike decided to just push himself and go for it.  We made a last minute scramble to get everything ready to go (put on hiatus while figuring out what to do) and made it out the door around 3:30pm – still just in time to catch our flight.

The flight, of course, was miserable for Mike.  The next day confirmed that he probably had some type of food poisoning.  We hopped on another flight that morning to get to Phuket where it was a relief to see our friends at the airport.  We rode a shuttle car for about an hour before arriving at our hotel/holiday apartment.  Our thoughts at the time – phew!  we actually made it!

Mike was still sick, but able to get around.  We went to a beautiful beach where it was super relaxing to just float in the warm water and see the silver fish below.  Jennica loved it and would squeal with delight every time a wave would rise up.  Afterwards Jennica played in the sand and we picnicked on chicken satay and spring rolls under the shade of an umbrella.  Mike’s stomach could only handle rice with an egg. 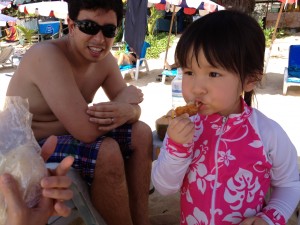 After returning to the hotel for naps, we ventured out again for a tourist show called Fantasea.  We thought Jennica would enjoy it since it featured elephants, lots of them (on stage!), as well as dancing.  But during a slow beautiful dance about halfway through the show she said it was “too scary” and she was “all done”.  This was several acts after a dance depicting fighting warriors with scary masks (which is the one where I thought she would call it quits!).  So Jennica and I went outside to play games in the carnival-like area of Fantasea where she won a sympathy stuffed animal (the rules clearly stated that you must catch 12 balls with the net to get a prize – we caught zero and the attendant let her pick one).  Afterward we had a buffet dinner which was pretty good – lots of things to try!  Overall, Fantasea was an interesting experience.  Mike felt the show was a “combination of every show you would see on a cruise ship all wrapped into a 90-minute presentation on a Las Vegas style stage.”  The rest of the theme park was really quite fun for Jennica and also very interesting to see – fake palace facades and real elephant rides, carnival games and souvenir shops.  You kinda have to see it yourself… 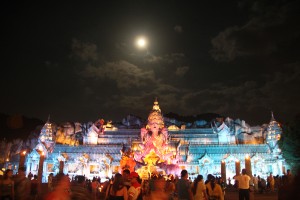 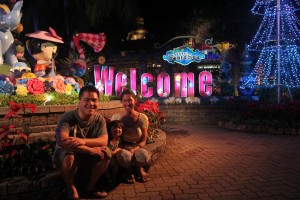 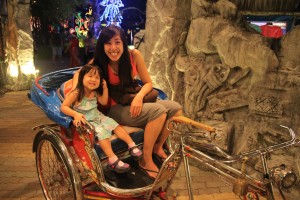 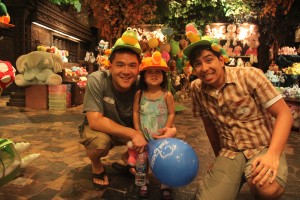 Ah…if only Frankie hadn’t made her daily order of papaya salad look so appealing!  But more on that later…

We had scheduled a tour for this day which included kayaking and an elephant ride, which Frankie and I were eager to try.  However, after reading really negative reviews regarding the tour (especially about the poor treatment of the elephants), we decided to cancel the tour and do just an elephant ride with another company which received better reviews on the treatment of the elephants.  In hindsight, I believe all elephants are probably treated pretty poorly because it was pretty heartbreaking to see such large, beautiful animals chained by their feet to a post to stay put while eating, and driven by a driver carrying a large stick with a very sharp metallic hook on the end (this was not used on our elephant but I assume the hook serves a purpose).  So…now I feel pretty guilty about contributing to the elephant tourism industry which keeps these guys in chains.  Jennica, however, was simply thrilled to ride an elephant. 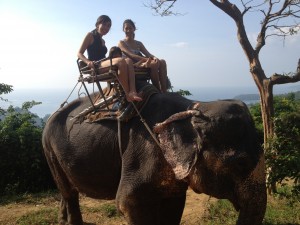 Afterwards we took a walk to the beach closest to our hotel and had a nice beach-side dinner while watching twilight turn to night.  It was after the dinner that I realized the papaya salad that Frankie and I had for lunch didn’t settle well.  I didn’t know that 10% of the papaya salad eaten in Thailand leads to food poisoning.  (But I probably should have guessed it!!)  Luckily, Mike and Jennica didn’t eat any of it (which would have added to Mike’s existing digestive issues) and Danvin only had a little.  So now everyone had some degree of something icky, except for Jennica! 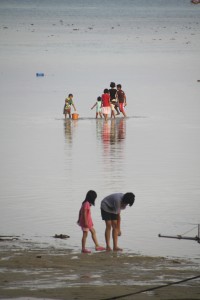 Kids collecting something in the sand during low tide – clams? crabs?

We had a boat tour to Phi Phi Island scheduled for today, but after my eventful evening I was spent – and still a bit queasy.  Frankie and Danvin were troopers though and went on the tour anyway.  Mike and I knew with the condition we were both in it would not be a fun boat ride and day at the beach for us – especially since Jennica was full of energy and feeling great.  Where would we scrape up the energy to keep up with her?  So we stayed in our hotel and tried to rest while she ran around us entertaining herself, and then being entertained by the TV.  In the afternoon we managed to make it out to the pool.  That day I ate nothing but “safe” foods – crackers and pizza. 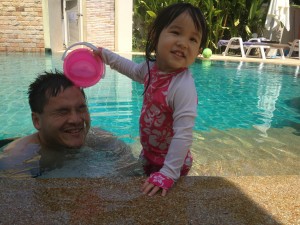 Jennica in our hotel pool

Day 5/6 – Our Return Home and the iPad Miracle

Our return home was a great example of what happens traveling when both parents are not at their best. After flying two back to back legs (Phuket to Bangkok and Bangkok to Taoyuan) we arrived at our hotel in Taoyuan and realized that we left Jennica’s portable potty seat on the airplane.  Argh!  We loved that thing and nothing as good as it exists in Taiwan. The next day we took the high speed train from Taoyuan to Kaohsiung and after returning home we realized that we had left Mike’s new iPad mini on the train.  AAAAAARRRRGGGGH!  We contemplated the odds of getting it back.  Kaohsiung was the last stop for the train before heading back north to Taipei so a cleaning crew usually enters before others can board.  We were the last passengers off our car – perhaps the cleaning crew found it and turned it in?

I went to the train station with my mom as a translator.  The guy behind the help desk asked a series of very specific questions – what train did you arrive on?  what seat? color of the iPad? etc.  Then my heart soared when he said, we found an iPad on that train.  He handed me the iPad – is this yours?  My heart sank.  No, it’s not.  Man, how many iPads are lost on the train each day?  He had me leave a description of our iPad and our contact information in case something came up, but he admitted the odds were not good since it wasn’t found by that cleaning crew.  I sadly gave up hope but left a message for Mike saying he should answer any call from an unfamiliar Taiwan number in case it was the train station.  A few hours later I received a series of frantic texts from Mike – they found his iPad!  Thank you, God!!  It turns out that the iPad actually made the journey all the way back up to Taipei and then down again to Kaohsiung before it was found by the evening cleaning crew.  The guy behind the help desk couldn’t find it earlier because the iPad was listed as being found on a later train.  Seriously, how many iPads DO they find each day?  We thought it was unbelievable that no one decided to pick it up during its entire “journey without its owners”.

That concludes my very long summary of Thailand!  Thank you Danvin and Frankie for bearing with us and sharing in the adventure!!  Khob-kun-ka!  (Jennica still says it from time to time.)