We heard a smattering of fireworks on and off throughout the night last night and during the day today, but it wasn’t loud enough to keep us awake as I feared.  Instead it sounded like gunshots from a distant battle.  Today, since it was the first day of the Chinese new year, Mike and I wanted to see a lion dance, a parade, drummers…anything that might be festive.  In the morning, Mike saw Taiko drummers practicing by the department store (Hanshin) near our apartment so he figured there might be something happening at Hanshin.  We walked to Hanshin around 11:00am and there WAS a noticeable crowd starting to gather by the front, but the stage did not look like it was set up for a performance.  Instead, it was clear that a raffle was being held.  People were in line to buy raffle tickets and there was a shiny new car on display.  Maybe there would also be a performance?  So we waited… 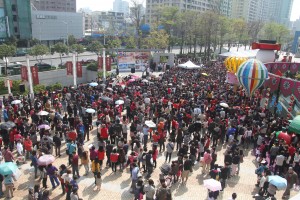 Waiting for the raffle winner

Nope.  Right after the winner was announced the crowd dispersed.  Disappointed we headed inside the department store.  Bingo!  On the first floor we could hear the sound of drums and the crash of symbols.  When we arrived where everyone had gathered we could see lion dancers moving through the department store.  In fact, there were three lions.  Apparently, each store within the department store posts a red envelope somewhere for the lions to take on Chinese New Year’s day.  The lions bring the stores luck, and the performers collect some cash.  It was fascinating to watch as the lions were being directed from store to store and the red envelope was pointed out.  Sometimes it would take several attempts to reach the red envelope if it was particularly high up.  This requires the “head” performer to jump up onto the “rear” performer’s shoulders and balancing to get the red envelope. 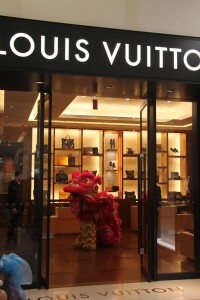 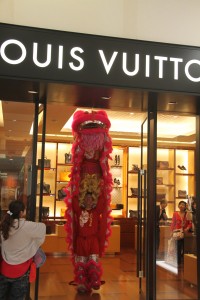 Reaching for the red envelope

They did this for every level of the department store and every individual store within it – eight levels total.  It turns out they had two teams of lions – another three lions were working a couple floors above us.  This department store has almost every brand name of cosmetics and high-end purse/clothing company that you can think of plus many, many more that are from Japan or mostly just known in Asian countries.  The team of performers were constantly tag-teaming in to relieve one another.  Overall, an impressive amount of work.  I wonder how much they made that day? 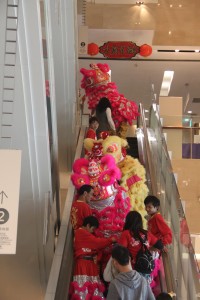 Lions moving to the next floor