In the Bay Area I used to take Jennica to a Mandarin music class called Little Panda.  She loved it and has learned to sing quite a few Chinese children songs because of it.  I was hoping to find something similar to take Jennica to over here in Kaohsiung.

Well, Shu-Fern told me about a class that’s walking distance to our apartment so Jennica went for the first time yesterday (Mei-Yu Kids Music and Dancing).  The price for the class is quite comparable to US prices for something similar – in fact it’s more expensive than the Little Panda class Jennica was taking – so my mom mentioned that really only the very wealthy in Taiwan could afford such a luxury for their kids.  My mom managed to get a discounted price by paying for classes for Ashley as well so that she can attend with Jennica.

I was always very impressed with Jennica’s Little Panda teacher and pleased with the class, but I was quite blown away by yesterday’s class.  The class is organized around a series of books, which come w/ a music CD, and the theme of the class follows the books.  Yesterday’s book was about Santa Claus searching for his missing bell – and the song was Jingle Bells.  The teacher then proceeded to go through a series of activities all related to the book.  She played a little ditty on the piano of short notes and taught the word for “catch” and had the kids pretend to catch snowflakes.  Then played a series of running notes that sounded like the wind.  She taught the word for “long” and “short” corresponding with the music and had the kids run around and stop and get twirled by the parents with it as well.  A few of the other activities included having the parents pull the kids around on an extra-large shirt that served as a sleigh (and taught the word for “sleigh”), and hiding hand-bells under pom-poms around the room so kids could find the bells and shout “I found it!”.  Kids were also encouraged to find pictures in the book where Santa’s clothes were “red”, “white”, etc. and had the chance to play three different musical instruments to go along with Jingle Bells – sounding like the feet of reindeer or the bells. 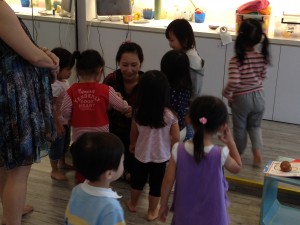 Receiving stamps at the end of music class

It was very repetitive and focused on vocabulary-building at the same time.  I don’t know about Jennica, but I learned a lot of words that day!  So excited to find this so close to where we live!