Some friends of ours from the Bay Area (Jonathan, Kathy, Danvin and Frankie) were all in Taiwan this week, so we decided to meet up in Taipei for the day.

Interestingly enough, today was the first time we’ve been in Taipei since arriving here a month ago.  And actually, it might actually be the only time we’ll be in Taipei for the remainder of our stay here.

Since we knew we’d be running around a lot today (and since we wanted a day off), Lani’s mom was gracious enough to take Jennica for the day… so, in short, Lani and I partied. 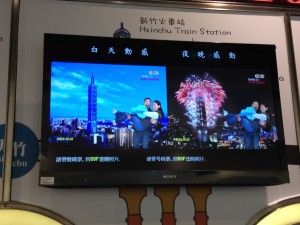 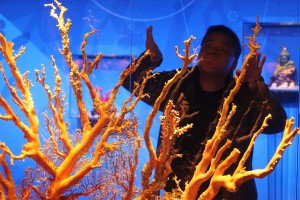 More strangeness at the coral stone exhibit, at the top of Taipei 101

It was actually a pretty chill time… we spent most of the day walking around Taipei with Jonathan and Kathy, eating lots of food and checking out the sites (and since we’re technically tourists, sightseeing would obviously include a trip to Taipei 101).

At night, Danvin and Frankie were able to join us as well, and we headed to Shilin Night Market, indisputably Taiwan’s most famous night market. 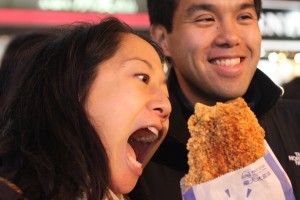 Okay… so the rest of this is slightly NSFW. =)

Now, I’m not sure if I was just being overly joyous with having a full date-day with Lani without Jennica, or if it was the motorcycle exhaust that I had been breathing in all day from walking the streets of Taipei, but I couldn’t help from acting completely immature (like, teenage boy-style immature) at the night market.

By itself, this shouldn’t be particularly hilarious or unusual.  I’ve actually known about it for years, and I’ve had it on occasion (it’s a pretty fatty/oily dish, but it’s not bad).  But for whatever reason, on this night, I couldn’t stop giggling at the name.

So suddenly, the rest of my evening was spent on a mission to try and buy a “small sausage wrapped in big sausage” and to take an inappropriate photo of some kind with it.

After about 15 minutes of searching, I had found my food stall. 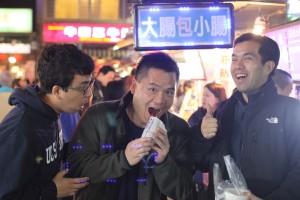 Thankfully (and to Lani’s relief), I guess it ended up being not-so-inappropriate of a photo.

But should any of our friends think I was being inappropriate, let me just tell you that I was not the only one with a dirty mind.

Check out the stall that was right next door to the sausage guy: 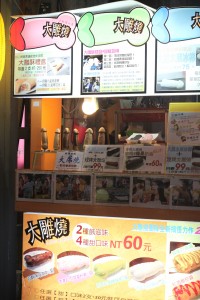 One thought on “The Day in Taipei”