We had a wonderful time visiting our friends Evan and Vicky and meeting their now one-year old daughter.

In addition to catching up with old friends, one of the highlights of the trip was definitely the food.

While that can likely be said of a trip to any foreign country… and while it may seem a bit silly to say that given that we’ve been living in Taiwan for the past month now… there is actually something that is quite unique about Singaporean cuisine, especially from the perspective of an American.

In terms of Taiwanese food… we can actually eat pretty much anything we’ve been eating in Taiwan in America.  There are numerous “Taiwanese Cafes” known as 台湾小吃 (tái wān xiǎo chī) places in both the Bay Area as well as in San Diego, which we actually frequented on a somewhat regular basis.  The difference is that the version in Taiwan is (on average) better tasting and cheaper.

But in general, any food that you can get unique to here, you can find in Cali.

That’s definitely not true with Singaporean food.  We had a great (and calorically intensive) time enjoying all of the Singaporean local favorites, including kaya toast, bak kut teh, soft boiled eggs, and laksa. 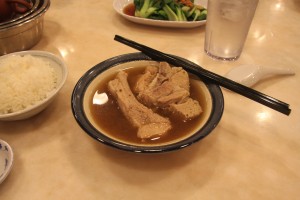 Bak Kut Teh, a pork-rib and pepper-soup dish that’s famous in Singapore, and deeeeelish 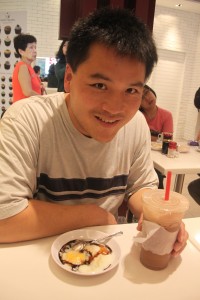 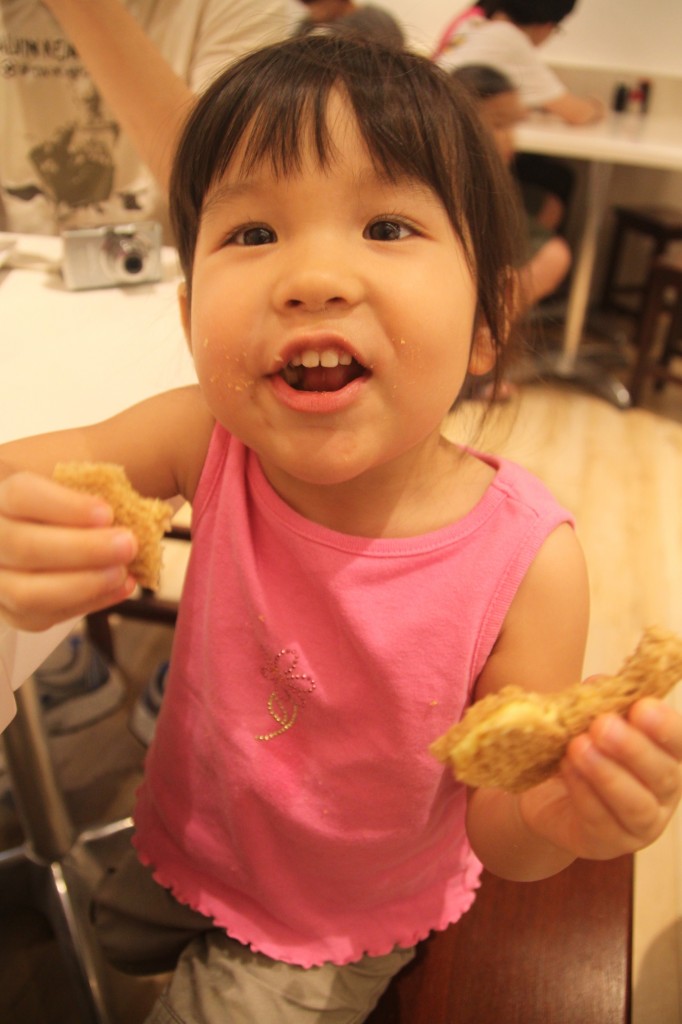 Lani’s such a huge fan of the laksa that she bought about 24 packs of uncooked laksa to take home with us!  We almost had to buy a second suitcase just to fit it all…

In between eating, we also checked out some sights.  We had been in Singapore two years ago with Jennica, so we thought it would be fun to re-take the same kind of photo we took with her when she was just nine-months old at the famous Merlion in the Marina Bay. 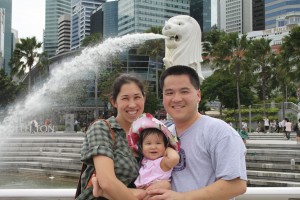 Jennica and the Merlion at 9 months 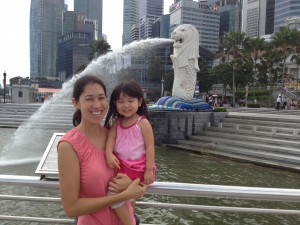 Jennica and the Merlion at 2 1/2 years

We also had a wonderful time taking our daughters out to a bike ride along the famous East Coast Park along the east coast of Singapore… with toddler bike seats and everything. 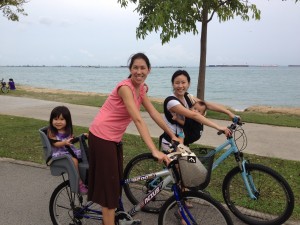 And one highlight that we missed two years ago which we knew for sure we wanted to hit this time around was the Night Safari at the Singaporean Zoo. 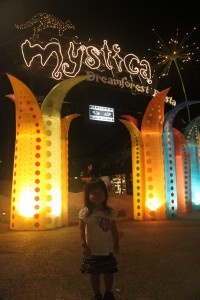 First of all… something to note about the Singaporean Zoo: it’s built using a paddock system, which is unlike anything you’d see in the states.  Basically, the animals get to roam around freely in these paddocks, and you get to walk around with them.  Obviously for the more dangerous animals (elephants, lions, tigers, etc.) there is a moat that will surround their habitats, but those moats are covered with grass and other vegetation, so it still feels like you’re roaming around freely with the lions and tigers as well, just like what I imagine it would be like in the savanna.

And the Night Safari is an added twist to it all, where you basically get to go (as the name suggests) at night.  It gives you a completely different view of the animals, as many are nocturnal, and even for those that are not you get to see completely different behaviors from them at night vs. the day.

The Night Safari doesn’t open until 7pm, but they have a pretty cool looking outdoor food court area which opens up at 6pm, and the entire thing is open until 11pm.  They also have a lot shows and side entertainment, too.  If we were to do it over again, we’d probably aim to arrive right around 6p to make the most out of the entire evening… but due to a scheduling snafu, we didn’t get there until around 9pm.

The zoo itself is set up very nicely.  They have a single-tram ride which takes you through the highlights of most of the zoo.  It’s 45-minutes round trip, with a single stop in middle of the route where you can hop on or hop off.  But in addition to that, there are about a half dozen “walks” or paths that they have built which take you to all the other areas of the zoo.  You could easily spend at least a few hours just going on all the walks (we unfortunately only ended up being able to do the two shortest ones).

We had a ridiculously early flight leaving Singapore this morning to head back to Taiwan… early as in we had to be up by 4:30am.

Naturally, when you’re up that early, your body tends to revert to more primal instincts.  For me, it means that I was seriously craving a doughnut.

Fortunately, I remembered that the Singapore airport has a Dunkin Donuts there.  For those that don’t know, I have a particularly strange love-hate relationship with DD…

For the love-side of our relationship, it’s all about their Old Fashioned Glazed Donut.  In both the physical and in the spiritual world, I think it is second only to Manna from God, Himself.

Now, for the hate-side of our relationship, why-oh-why are there no DD’s in California?  Sure, Lani and I can get our fix whenever we visit friends in Texas or in Chicago.  But seriously, it is downright criminal that the most populous state in the union only has access to KK (which will always try desperately but fail miserably at trying to keep up with DD).  Furthermore, I find it most fascinating that while you cannot get a DD in California, you can get DD’s in most Asian countries… including Singapore!

Anyway, speaking of DD at Singapore, as we get through the security line (which, unlike our wonderfully efficient TSA took all of 18 seconds… more on that on another post), we start heading to the shrine of the golden rings… only to find it… not open.  What!? 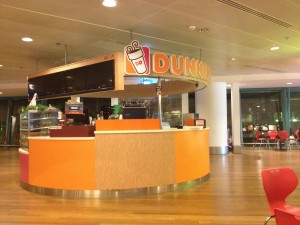 It was then when I realized that it was not even 6am yet… so I figured, okay, I guess I can grant DD a little bit of grace since it’s so early on a Sunday morning.  But right across the walkway, I see this: 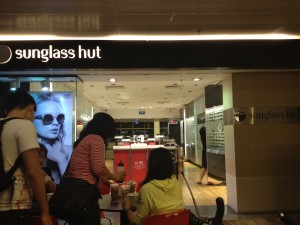 Oh… and the love-hate relationship continues…

But when I came across this in a local Singaporean grocery store while shopping with Evan and Vicky, I thought it just took this to a whole new level. 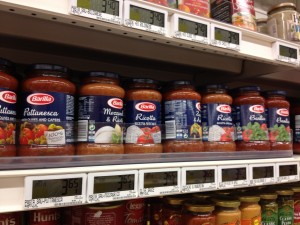 That’s right… those are LCD displays… for price tags. 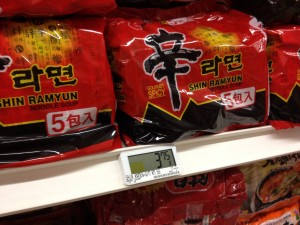 Apparently, they use LCD displays since it’s easier to update and deal with rather than using stickers like we do at Vons and Safeway.

This past weekend, we had the opportunity to visit Evan, Vicky and their soon-to-be 1-year old daughter in Singapore.

One of the things that I’m most impressed with about Singapore is how diverse it is — besides cities like Los Angeles, New York and London, I think it’s one of the world’s most diverse places when it comes to different people groups.

A lot of people who are not familiar with Singapore may not realize that Singapore doesn’t really have it’s own culture or ethnicity.  While there are people who call themselves “Singaporean”, this is much more of a label of national identity, and not one of cultural identity.

So basically, similar to the US, Singapore is a country of immigrants.  While a majority of Singaporeans typically come from China, India and Malaysia, there is also a very active (and growing) minority of White Europeans and even Americans living there as well.

A walk along Singapore’s famous Orchard Road (their equivalent to Fifth Avenue or Michigan Ave) looks very much like a walk down the road of any of US’s major, diverse cities like LA and New York (well, except for the über cheesy Christmas decorations 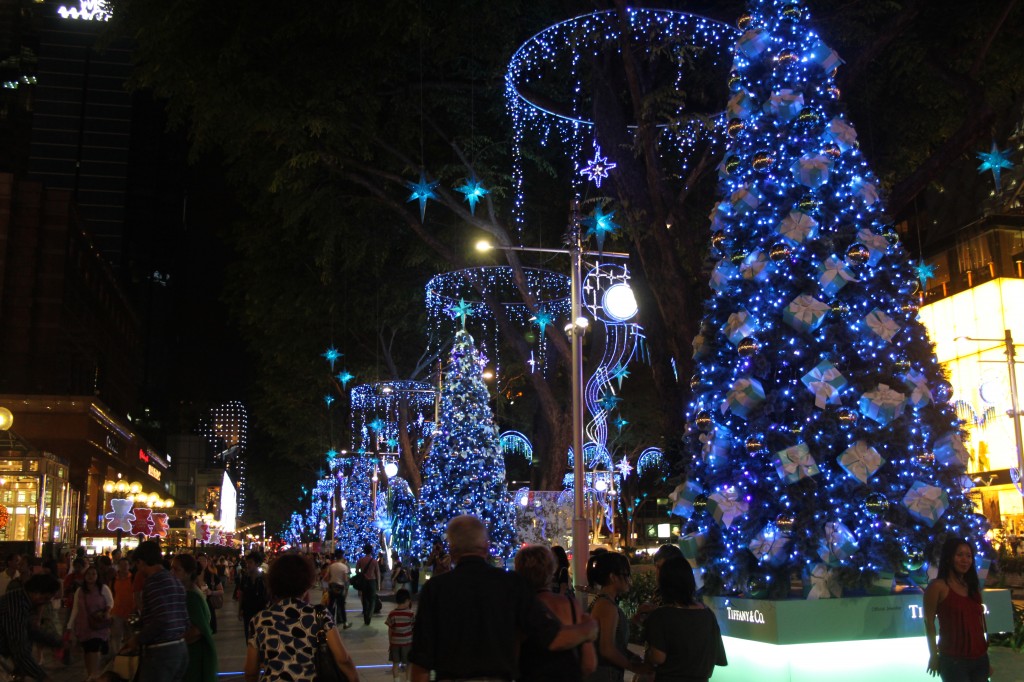 But in my opinion, one key difference between the US and Singapore is how supportive Singapore is with their diversity.  In the US, almost a half-century after the Civil Rights Movement, we are still struggling with how to understand and appreciate the unique asset that we have in the diversity of our people.

I had one enlightening conversation with Evan about immigration into Singapore, especially the immigration of skilled workers and how Singaporean laws go out of its way to encourage it.  While in the US, companies typically have to pay $15k – $20k to get a potential skilled worker/candidate all of the necessary paperwork to process an H1-B visa, in Singapore, it’s typically about $200.  Total.

And as a much more tangible example of how Singapore is with their diversity, just look at the signage everywhere.  Everything from instructions to street signs are constantly showing multiple languages.  I conclude with some food for thought — how many ways can a country say “Drinking Fountain”? 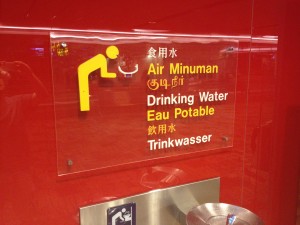